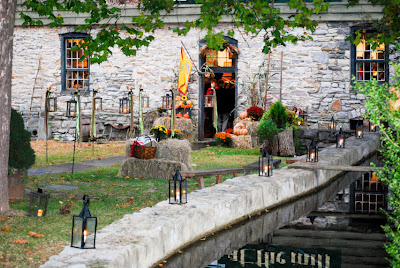 I wasn't looking forward to my 27th day in a row on the job and my fourth consecutive Saturday at the Burwell-Morgan Mill.  The second day the artists come pick up their unsold work, always a bit of a melancholy time and one that doesn't need a lot of "administration," seemed excessive.  But there I was, for lack of other volunteers who know it's not a lot of fun, having artists sign a sheet to claim their unwanted.

But there I found a cheerful, angelic helper named Kathy upstairs and the excitement of the millers downstairs, lining up the two big millstones and pouring freshly cracked corn between their crushing  power, and the sound of that big oak wheel moving a whoosh! of water, and I soon recognized that I was where I should be.

The six hours went quickly and more art show volunteers appeared throughout the day, helping to get the place in shape for the rest of its season better than ever before... not a stray task undone.  The "boys" ground 300 pounds of grain, resulting in 135 two-pound bags of freshly ground cornmeal, grits, and 9-grain!

Winding down the day, I went up the attic stairs for the umpteenth schlepping when i discovered a pigeon standing on the attic floor.  Didn't want to fly but walked fast enough to get away from the bucket i tried to shooo him into.  Then I scared him into walking between two very narrow, tall, long walls.  "Oh god, I've done it now.  He'll never come out, he's a goner.  I've failed miserably already in my wildlife rescue skills" ran through my exhausted head.

I implored him to go out the other end of my imagined death maze, and he did.  I shooed him to a stair - he was so weak and slow - and after again failing to get him in the bucket, reached down and easily picked him up with bare hands.  I thanked him and the good lord and, plumped up like a proud hen, waltzed down the attic stairs.  ("A bird in the hand is worth two in the bush"  has only come to mind in hindsight.)  "What have you got?" someone asked and i announced I was On The Job.  Down the stairs to the first floor, the millers were at rest and witness to my catch as well.

I took the bird outside to the far side of the head race and set him on the stone wall near the waterfall.  He immediately started picking at the little weeds growing out of the mortar - he was hungry!  Dear crazy old Ed thought to get some just-ground 9-grain to feed him and we did.  I watched for 10 minutes as he poked around, snacked, looked for his friends (roosting on the other end of the Mill), and didn't go far.  For the next half hour, I checked on him out the window to see him toddling around, still getting bearing.

I walked down the stairs and said good-bye to the Mill for my final time in its employ.  The millers gave me a sweet send-off and a free bag of grits.  And the pigeon had flown away. 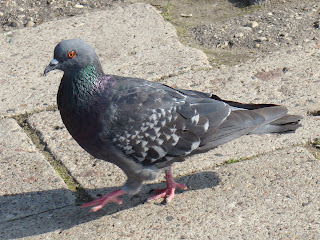 Common Rock - and Mill - Pigeon (not my photo)